Das zweite Interview führt uns erneut in die Niederlande. In der Reihenfolge der Gesprächspartner ist das purer Zufall, zeigt aber, dass unsere Nachbarn einiges zu bieten haben. Dieses Mal hat Doctor Speed Katja und Han Brom befragt. Ihre Delirious-Whippets beweisen, dass das aktuell arg strapazierte Siegel dual- bzw. multipurpous wirklich Substanz haben kann.
Elf Delirious-Würfe in den letzten 15 Jahren – es soll ja Whippetzüchter geben, die die gleiche Reproduktionsstatistik nach nur 12 Monaten auf den Tisch legen können. Doch die Broms sind sparsam. Aus dem Champion für Schönheit und Leistung Delirious Gabriel und Delirious Holy Grail sind nun für den Frühling 2012 die nächsten Welpen zu erwarten. Die Eltern sind beide auf dem Coursing-Feld, und im Ausstellungsring sehr erfolgreich. Im Showring extrem eingeschlagen hat auch der 2010 aus den USA importierte Rüde Sunbeam Highlander of Starline. Er ist ein Sohn von Starline’s Souvereign und ein Neffe der Ausnahme-Hündin Starline’s Chanel.
Wie angekündigt, ist auch dieses Interview in Englisch geführt.
What do you think are the differences between a multipurpose-whippet and a pure show dog? Are they just exterior or do they differ in their temperament too?
No,to us there should be no difference. To us there is no different coursingwhippet, a showwhippet and a racing whippet, etc. The breedstandard states clearly (with room for some difference for interpretation) how a whippet should look like. This is the whippet we have to take to racing, coursing & showing.
Your dogs are successfull in the ring as well as in the coursing field. How important are their coursing abbilities in your breeding plans?
Not too much! Meaning, it would not be a consideration when looking for a studdog or breeding with a bitch. If a dog is build correct & trained well he can run. Of course it’s nice when they do well and they still can do the things they were bred for. What we see as the greatest advantage with coursing with a dog, is you can get some idea of their health. A dog with major health or structural problems will not be able to perform well at coursing events or on the daily training exercise. And the best thing for the dogs itself is they LOVE to course! No matter if they are first or last, they have a wonderful day!


What do you think about a show-judge, that calls one of your dogs too muscular and propose to limit his/her coursing-activities?
Well that says more about the judge and his knowledge of sighthounds. Sad, especially when the mentioned dog has no bulky, round muscles, something we don’t like either. We look for flat muscles in our dogs, and don’t like thick round muscles. Especially in the forehand, this destroys the sleek, curvy outline of a nice whippet. We also like to see enough fat on a dog to see smooth flowing lines and not hums and bums of muscles. But when a dog has a strong, hard muscle condition and enough body fat,  we think it looks (and feels) so much nicer. So we would never stop coursing a dog just for the opinion of a judge.
From our start in whippets we already had a American whippet (Ch. BohemAmerican Gigolo) and some American lines behind our dogs, so to us it’s not something new. What has attracted us the most in American dogs is the fact many American breeders test their dogs health before breeding. We think they are much more aware of the importance of this then some other countries. To us this was a major benefit. 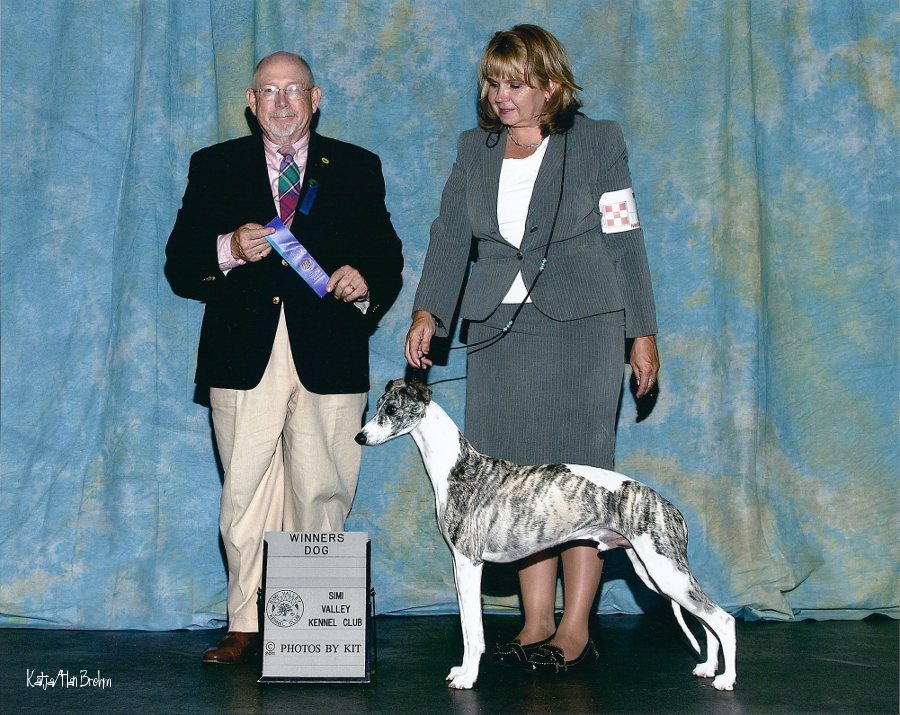 Oban in the USA – exclusivly handled by Lori Wilson he gained his points for the american championship after just two month of showing. Foto:Katja/Han Brom

Also the American breeders lay much worth on happy outgoing temperaments, since this plays a big role in their way of showing. I don’t think you can speak about better or different qualities in comparison to the pure European/British lines. Within our breed there is something for everyone’s taste, no matter if you choose a European, English or American bred whippet. Let’s be glad for that and let’s be glad for all those different types and lines. Our breed has so many unfamiliar bloodlines, if necessary we can find enough lines for a outcross if a problem would occur in your own line or type. That’s a big advantage in comparison with some other breeds. So be careful to think your dog is superior because he comes from a particular country or type, maybe someday you may need the “others” to!
In Germany lots of whippet-people are complaining about the fact that whippets are getting bigger and bigger. Regarding the european standard, do you see any current hights-problem?
With our own dogs no, (almost all are within the European standard), but to us it something we don’t bother to much about. It is certainly not something we base a breeding on. If a dog is a quality dog, he is a quality dog, not matter how big or small. We see the height as ideal, not as a disqualifying point. It’s hard enough to breed a really good dog, in exterior, temperament & health. So if you find that exceptional one, it would be rather stupid to not use him in a breeding program when he is too big or small. That’s is not good for the gene pool either. Of course we would not breed a really big dog to an even bigger one. But breeding for correct size is not a science. We are working with live animals. Even with breeders who base their breeding program on size, you see big offspring. So let’s not make a to big issue out of this.


Obans hights fits perfectly to the european standard. Would you agree to the theorie that US-dogs are importing the „hights-problem“?
No, that is a rather shortsighted theory. And those theories, most of the time, comes from people who actually even never been to America to see the dogs there. Then they would see America has many whippets who would fit the European standard with ease. It’s not like they have the sonly right on big whippets. Let’s be honest we see “big” whippets everywhere! I know enough dogs here in Europe and England who are really BIG. But it’s always easier to blame it on someone else, than to see the problem in your own lines or type of dog.

Why should we want to do that? As long as a really good whippet can win everywhere in the world I can see no reason in combining the two standards.
How should your very personal perfect whippet look like? How should be his temperament?
This perfect whippet, who still lives only in our head, should be strong in mind and body, smooth with flowing lines, and has the typical rise over the loin. Enough length of chest and loin. Brought tights and second tights. Strong feet, front and hindlegs straight with no towing inward and outwards. A pleasant head with good ears. To say it simple; sound. But most of all the typical whippet temperament: happy, healthy, outgoing and easy to live with. Han & Katja Brom, Delirious whippets, dec.2011
Thank you very much!
Titelbild: Delirious Hot Persuit, Open Class V1, VDH, R-CAC, R-CACIB at the International Show in Kassel, December 2011. Foto: Jessica Bolander
Already published in November 2011: Zum Nachtisch in die Niederlande – Crème Anglaise Whippets