Jan, in 2010 you and your partner Kris had your first two litters. So you are a newcomer in breeding. What made your decision to start breeding whippets?
Well, we are not completely new in breeding but you are right they were our 1st two Whippet litters. In the past 15 years we have bred many litters Cocker Spaniels and after that the Beagles, including a world champion, but Whippets have always been a favorite breed for us and about 3 years ago we decided to stop completely with the beagles and concentrate solely on the Whippet.

It is obvious that you are concentrating on old english blood-lines. Is there any breeder that you admire for his achievements in breeding.
First of all breeders should understand that they are only a very small part in the history of the race they breed. Many beeders in the past have contributed to the dogs we love today. We therefore always admire, respect and value the opinions of the older generation of breeders and judges, without becomming rigid and excepting the constant changes and approvements that the current breeders are trying to create. So yes, we concentrate on the English lines but we can certainly see the beauty in some of the American lines as well. It is difficult to name only one name but Peter Morgan (Spinneyhill) we must admit has been a great inspiration to us. We have known Peter for many years, already back when we started breeding Cockers. Sadly he past away last year. 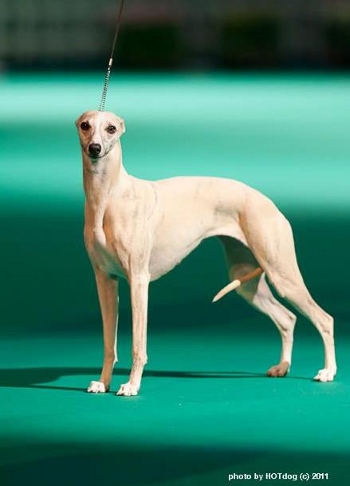 Bayard Tomatin was a very sucessfull dog. He is the father of Nicky (Hello World die Mahana) and the grandfather of your young dog You Tube z Úplnku . Can you
describe his special qualities?
Bayard Tomatin, we called him Danny, was a special dog to us. The 1st time we layed eyes on him was when I went to collect a beagle from his breeder Jill Peak (Bayard) She is a highly recognized beagle breeder in the UK. We fell in love with him immedeately and asked Jill if it was okay to have Danny in our home for a couple of months to show him in Holland. She said yes no problem but after 1 month we had to call Jill and tell her that if she didn’t mind she was not getting him back… Jill understood the situation and was happy for us and for Danny. And that is how Danny became the founding father of Crème Anglaise Whippets. Danny made a flying start in his show-life, and became Club Winner 2008 and International Champion. He won numerous CAC’s and CACIB’s. His most admired quality and best feature was his excellent movement. This quality he passed on so well to his offsping and that made us decide to make him special in the creation of the Crème Anglaise bloodline.

The sisters Hannah and Hello World die Mahana are both very successfull. Do you arrange your show-plans with Dominique Delabelle so that the two bitches won’t have to compete?
First of all let us start by saying a big thank you to Marie-Christine and Dominique for recognizing Danny’s special qualities and mating him with their topdog Daydream di Mahana. From the moment he called us we knew we had gold in our hands with this combination. This combination has been the most succesfull Whippet combination in decades looking at the results of the two sisters Hannah and Nicky. When it comes to showing them we don’t arrange our show plans with the Delabelles. The sisters have been competing against each other several times, sometimes Hannah won and sometimes Nicky won.

Your dogs are perfectly trained for the show-ring. Do you have any special training methods?
Thank you for the compliment! No we don’t do anything special but we only believe you have to start training them young and put them on the table regularly so that they understand what is expected from them. 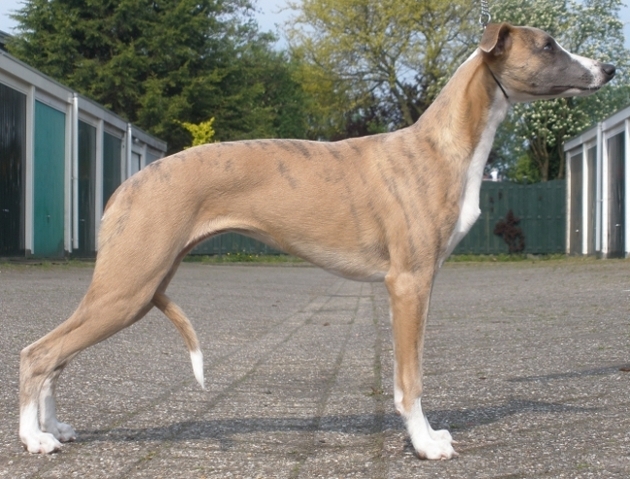 Do you think that judges should punish rude behavior in the ring?
Yesof course! If you mean exibitors being to harsh on their dogs in or around the ring and the judge takes notice, he should expell the exibitor. Showing dogs must be a nice hobby for the people but it must always remain nice for the dogs.

For your next litter with Nicky you have chosen Barnesmore Circle of Life to Oelmühle. He is a son of the 2009 Crufts-Winner Barnesmore Celtic Tiger. What are your expectations in this litter?
Well as always it was a mindbreaking search for the right sire. In our breeding plan we look at what we currently have and at where we want to go and what we like to see in our lines in the next generation, that means also looking at the faults of your dogs so you can improve your line. The perfect dog has never been born and will never be born because there is always something that you want to improve. But westrive for perfection. Movement is in our opinion very very important for sighthounds like the whippet. Movement says a lot about whether a dog is well constructed or not, therefore that is always an important element when we choose a sire. To the 2nd part of your question… well we expect these puppies to become nothing less than the best Whippets ever to have walked on this planet!   ….but doesn’t every breeder hope that?  🙂
How does your very personal perfect whippet should look like? Is there any whippet you know, that you would call perfect?
Perfect will never happen as we said earlier but we think that the breed standard as used by the FCI should be leading. This is what we want to see when dogs are beeing judged in the ring and this is what we aim for in our breeding. So the right temperament, measurements, angulations and movement all combined makes the perfect Whippet in our eyes. To the second part of your question, the answer must be „NO“ but there are many dogs we consider to be close to perfection. We are not naming any names because we don’t want to forget anyone and there are just to many very good showdogs in the ring today but also in the past generations.

Thank you very much, Jan!