I thoroughly enjoyed my weekend in Dortmund after being invited to judge your show there. Meeting old and new friends and new dogs. Thank you for the lovely entry and thank you also to the club for their wonderful hospitality. I think this is the fourth time that I have been invited to judge whippets in your country which makes me very humble.

There was such variation in type which there is to a degree across the world making this quite a difficult breed for some all round judges to get to grips with. There were of course an entry of working whippets which in the main tend to be straighter in their angulations and less deep in chest and fill in of chest than the show specimens. (Should this be telling us something?) 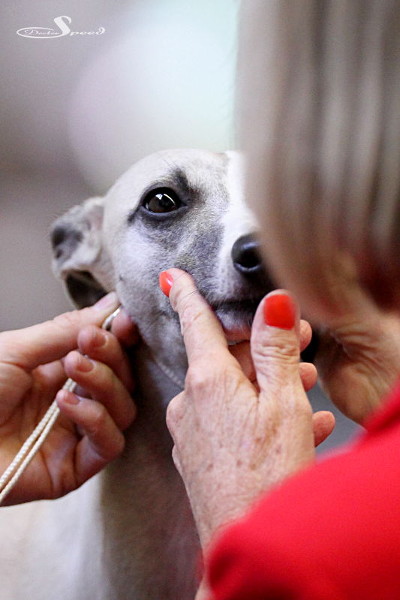 Overall I felt that the breed had improved since the last time I had judged there. What I found very pleasing was that nearly all entrants were of correct size.

Of my BOB the bitch Showmaster’s Honey Honey I wrote: „Beautiful fawn bitch who oozes quality. So feminine and of correct size and type. Excellent conformation and beautifully presented. Moves soundly and covered the ground on the go round.“

After taking BOB she went into the Group ring and showed like a dream to take Group3. As you can imagine I was thrilled for her and her breeder/owner Jens Fischer.

My BOS, Xiomara Sorry For Party Rockin‘ I discovered later that he is an American import. Of him I wrote: „Masculine 15month old brindle and white boy with a balanced outline. Rather tense when stacked pushing his neck into his shoulders at times therefore spoiling his top line but when relaxed he is very pleasing.“ It was gratifying to find that when the time came for the challenge he had settled into his natural and correct outline.

Thank you once again for the honour of allowing me to go over your dogs and accept my decisions graciously.